Ministry: Dark Side of the Terrible Mind, Mole, Honey in the Rio Grande

Ministry: Dark Side of the Terrible Mind, Mole, Honey in the Rio Grande

Introduction:
Emerging from Chicago in 1981, Ministry has quickly evolved and grown from its inception as a synth-pop band to one of the most influential and successful industrial metal bands to date. Even before other artists that were heavily influenced by them emerged, notably Nine Inch Nails, Ministry had released albums that are still iconic industrial metal albums today. The strogest of these pre-1990 albums would be The Land of Rape and Honey (1988) and The Mind is a Terrible Thing to Taste (1990). These albums really solidified a path to a major change in direction that most bands wouldn't dare turn onto. "Stigmata", "The Missing", "Thieves", "Burning Inside", and "Breathe" are only naming a handful. They continued on with a live album, continuing their still-trademark mockery of pop culture phrases as album titles, In Case You Didn't Feel Like Showing Up. 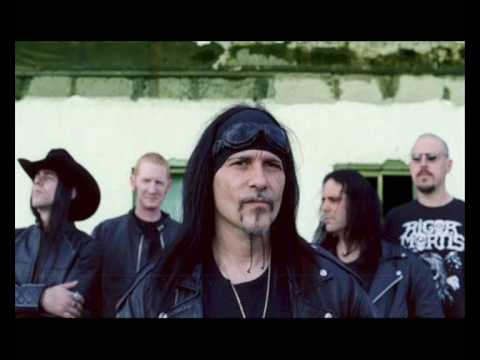 Psalm 69: The Way to Succeed and the Way to Suck Eggs arrived in 1992. Along with it came the video for the opening track "N.W.O." to heavy rotation on MTV. The video simply depicts chaos and the first major taste of the band's powerful disliking of the Bush administration. Industrial music, since it's inception with bands such as Throbbing Gristle etc, has always maintained a courage to speak out and not shy away from political or social issues. "N.W.O." was far from any exception. The video is filled with riots, battles, police brutality, political corruption, messages urging the people to "WAKE UP". The message isn't to revolt but it's to think about things, stand up for what you think is right, stop the injustice. In many ways, political and social stands like this paved the way for bands such as Rage Against The Machine to create entire albums about very specific global injustices from third world country's civil wars, genocide, and much more. "Just One Fix" and the ever famous (largely also due to its title) "Jesus Built My Hotrod", which features probably one of the fastest industrial guitar riffs to date. Psalm 69 also includes one of my personal favorites: "Scarecrow".

Ministry's sixth album, Filth Pig, arrived in 1996. This is likely one of the biggest album struggles the band had at this time since moving to harder electronic music with 1986's Twitch. If their intent, I would agree that after the previous three albums, it would start to feel redundant to continue in the loud, nearly 160bpm industrial metal that had become a signature for them. Filth Pig slowed the tempo back down again, matching more of obscure songs on The Land of the Rape of Honey. "Lava" is slow and groove driven while also having one of the coolest and simplest, for beginning musicians, industrial guitar riffs. "Crumbs" contains guitar riffs that are even hinting at styles similar to noise metal's Fudge Tunnel. It's more than likely true that most classic rock fans did or would have dispised Ministry's cover of Bob Dylan's "Lay Lady Lay". However, bringing new genres of music to a different genres fans and getting them interested, in this case, in Bob Dylan is a win.

1999 brought, another tongue-in-cheek joke of an album title, Dark Side of the Spoon. Filth Pig fell short in my opinion and didn't stand up to other heavy Ministry albums of that time (though it had plenty of good songs). Dark Side of the Spoon didn't disappoint. Most notably, "Bad Blood", which could have been pulled right off Psalm 69's and has another very easy to learn but very hooky industrial guitar riff. However, Dark Side of the Spoon was diverse and not a "let's just use formulas from the past that worked". "Eureka Pie", especially speaking in terms of guitar riffs, was another new evolution. Its opening guitar riff doesn't even sound like Ministry, upon the first listen and its release at least. "Nursing Home" sounds like Primus dropped by the studio while they were "in the neighborhood". Especially for a Ministry song, it's lovably very strange. In 2001, Ministry released their first ever collections of (as they put it "unsuccessful but notable songs"). Mocking every band's greatest hits albums, they continued to poke fun by titling it Greatest Fits. In addition to the typical "here's our favorite songs in album version form", it includes a very well done live version of "So What" (originally from the Mind Is a Terrible Thing to Taste album).

Also included was a cut from of their cover of Black Sabbath's "Supernaut". This was originally recoreded for the Nativity in Black (Part I) Black Sabbath tribute album that was released in 1994. The song is credited on the tribute album as 1000 Home DJ's due to legality issues. Joining Ministry and company was Nine Inch Nails' Trent Reznor, who beyond his own project of Nine Inch Nails had started collaborating with industrial artists that had even influenced him such as working with Pigface on the song "Suck". Trent Reznor had come in to sing the vocals for "Supernaut". However, as Reznor was in a legal battle with TVT Records over financial betrayal and other issues that lead to Reznor wanting to get out of the contract with TVT Records, Reznor couldn't be credited on the song....at least at this time. The vocals were by Al Jourgenson actually singing the song. In 2004, WaxTrax Records released a compilation celebrating their longevity of the independent label. Included, long after the legal battle, is the original version of "Supernaut" with Trent Reznor singing, clear as day.

Ministry returned in 2003 with the strangely, but...it's Ministry, titled Animositisomina in 2003. Songs included "Animosity", "Unsung", "Broken", and "Leper". "Broken" is interesting because the main guitar riffs sound like a throwback to 1980's era Megadeth. The vocals are humorously country western which is very much in the same style as "Jesus Built My Hotrod" in 1992.

While the music certainly wasn't a return to 1992's Psalm 69, the return of a Bush administration fueled another boost of motivation for music expression for Al Jourgenson in particular. Houses of the Mole powerfully arriving in 2004, Ministry obviously had no intention in beating around the bush (pun intended). "No W" opens the album, where earlier versions of the album include using Carl Orff's famous operatic "Carmina Burana" as its intro. While this was removed on later versions of the song, such as on Spotify, it adds a very powerful introduction to an album that is pretty much...pissed off and tired of corruption. Perhaps I am bias as I grew up around opera as my father listened to it often. "No W" does return to the very quick tempo which acts almost like "N.W.O." part two, but in its own respective creativity. Note that every song, with the exception of "Psalm 23" begins with the letter "w". "Waiting" contains an on/off but wonderful Ministry trademark, its industrial yet triple picking guitar riffs. "Wrong" pulls back in to more recent Ministry albums with a slower tempo and bass guitar riff driven intro. Lyrically, "Worm" is just mockery. There really isn't any use in hiding that. The near-psychedelic guitar riffs are interesting as well, especially on a Ministry album.

Ministry returned in 2006 with Rio Grande Blood. Of course, the Bush administration still in effect within the USA. Jourgenson took the opportunity to protest further with more risk, even for Ministry. The opening and title track manipulates soundbytes of George W. Bush to suggest corruption, greed, intention of profitable war, and so on. While these are obviously manipulations of various soundbytes from media sources that were compiled together to form viscious statements, it is also a very grim and real reminder that this can be done to anyone in an attempt to morph anyone of us into saying horrible things. Ministry's apparent curiosity in incorporating thrash metal is more than moderately present on "Senor Peligro". At many points in this song, the vocals almost suggest powerful influence from hardcore band Madball's Freddy Cricien.

For most bands that are fortunate to have the longevity to record ten studio albums, many factors begin to form that begins to possibly slow down the momentum and evolving creativity of the band. Ministry obviously had no intention of allowing this to happen as their eleventh album, The Last Sucker, steamrolled out in 2007. Their fourth studio album in only four years continued their attack on politics but pulled further in a metal direction rather than industrial, with the exception of drums/percussion that very much continues to mimic electronically created percussion.

After taking a five year hiatus other than tours and live/compilations, Ministry returned with a new album in 2012. Relapse opens with "Ghouldiggers" is both a direct attack and mockery of the modern music industry with special attention on band managers. The official video in the previous link is both humorous and bitter. "Double Tap" continues the album's step away from a previous nearly formulated format in the mid 2000s. Relapse is more of a metal album than any other album they have done up to this date. "Weekend Warrior" has them experimenting with the 90's Ministry sound but with completely different time signatures and rhythm structures.

Quickly following up 2012's Relapse was 2013's From Beer to Eternity. Opener "Hail to His Majesty" pulls more into the industrial direction with highly synthesized industrial pad samples as well as some electronic sequencing. "PermaWar"'s intro and main guitar riffs resemble very late 80's hard rock bands while the vocals are more death metal than Al Jourgenson has ever been. "Enjoy The Quiet" is an old school industrial album closer. They're not really songs in the sense of structure but noise, atmospheres, darkness, and so on to close out the album. After this, Ministry takes another studio break. 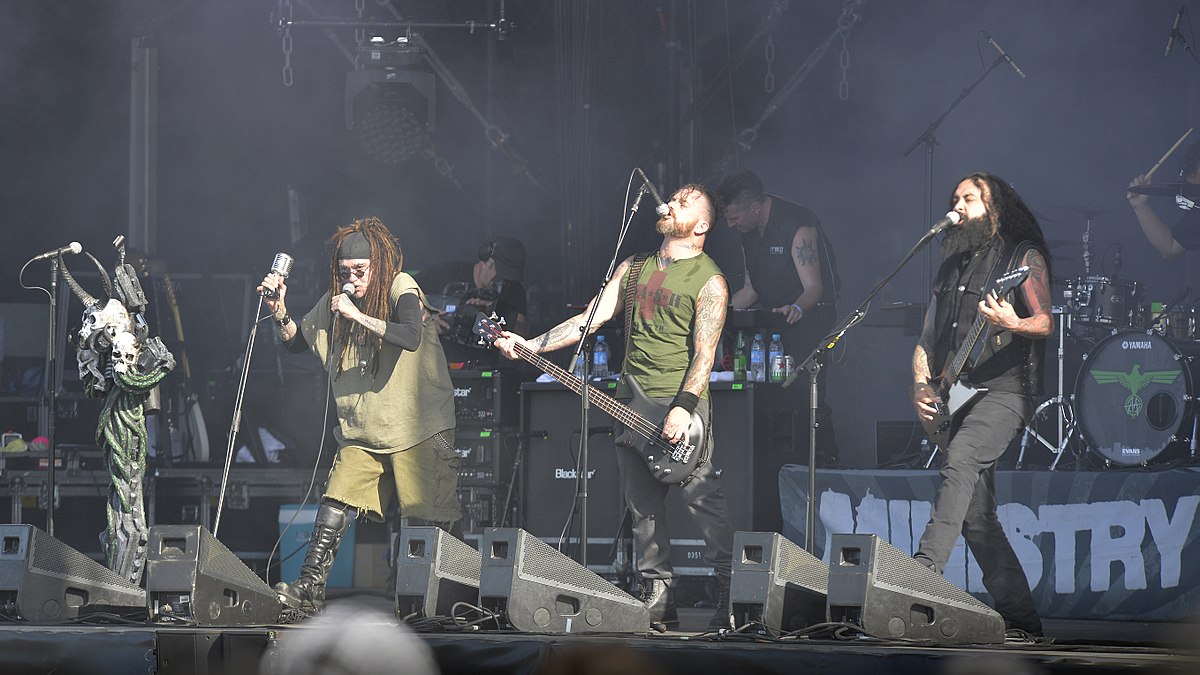 By 2018, as anti-politics have always been consistent with Ministry's themes. Thus, if one is familiar with the band and Jourgenson at all, it's no surprise that they jumped out of the woodwork when Donald Trump became president. In 2018, they released AmeriKKKant, attacking racism and politics alike....among other things. The elongated opening (introduction), titled "I Know Words" mocks Trump and his bumpersticker phrases as they're used as soundbytes but with effects and manipulations furthering how infantile they actually sound. Following is "Twilight Zone" and "Victims of a Clown" which attacks "he" and racism.

Regardless of one's opinion of Ministry's opinions on politics, social issues, human values, etc .... they are one of industrial's longest lasting bands along with Front Line Assembly, Skinny Puppy, and so on. Many, including myself, who even knew of them may think their popularity wasn't what it was. Yet, for example, their performance at Rock in Rio in 2015 shows they have unquestionably maintained their energy, gutsiness, and grit. This year, Tony Campos formerly of Static-X joined the lineup as well as Burton C. Bell of Fear Factory and Joey Jordison of Slipknot (as part of the touring lineup).

The Amazing Discography of Ministry

Victims of A Clown


So What (from In Case You Don't Feel Like Showing Up)